“What’s Wrong With Your Dad’s Head?”

Home/News/“What’s Wrong With Your Dad’s Head?”
Previous Next

“What’s Wrong With Your Dad’s Head?”

George Costanza of Seinfeld once told Jerry “it’s not a lie if you believe it”. One of George’s classic lines that is very funny and, perhaps, true to a degree. The following photograph is the only existing photograph of my son and I, together, at Shea Stadium. It was “taken” on the day of May 31, 2008 before the New York Mets faced the Los Angeles Dodgers. It was the last year of Shea Stadium before it would be demolished and made into a parking lot for the Mets new home, Citi Field. It is a wonderful memory that also happens to be a conjuring of the imagination and photo editing ability of my daughter, Sarah C. I wanted a special gift to give Nick for Christmas that year and with Sarah’s help, the deception was complete. Merry Christmas!

When Nick gazed upon the photo, you could tell he was very pleased. His look, then turned to one of puzzlement.

How could this exist? It never happened.

Sarah fabricated the photograph by merging the two photographs shown below. Nick and I had taken photos of one another but we had no photographs of us together. I was absolutely thrilled with Sarah’s final product. It instantly become a treasured piece of memorabilia. I have it displayed in my baseball room and Nick has a copy displayed in his home as well.

My son had a friend visiting who had noticed the photograph and was admiring it. He asked my son “what’s wrong with your dad’s head”? His friend noticed something in the photo that I had been completely oblivious to. The question I HAD to ask Nick: “what IS wrong with my head”? His friend noticed that my head looked tiny compared to Nick and his hand. He was right. I was proportionally smaller than a non-mutated Shawn. My head has never been mistaken for being tiny compared the an average man’s hand. Until now.

All these years later I still smile and laugh when I see this photo. I show the photo to friends and family that visit and I still believe that it is a photograph of Nick and I, together, at Shea Stadium because “it’s not a lie if you believe it”. It is a memory Nick, Sarah, and I can all share and that is what it is all about!

Below is a more conventional, non altered, photo of Nick and I at Three Rivers Stadium in Pittsburgh. We are looking down on the visitors bullpen. HONEST!

The “National Sports Collectors Convention” is being held in Atlantic City, New Jersey this August. If you have never been to one, put it on your bucket list. Joe Namath and Mike Piazza will be two of the guests at this years convention. How can that not be AWESOME? 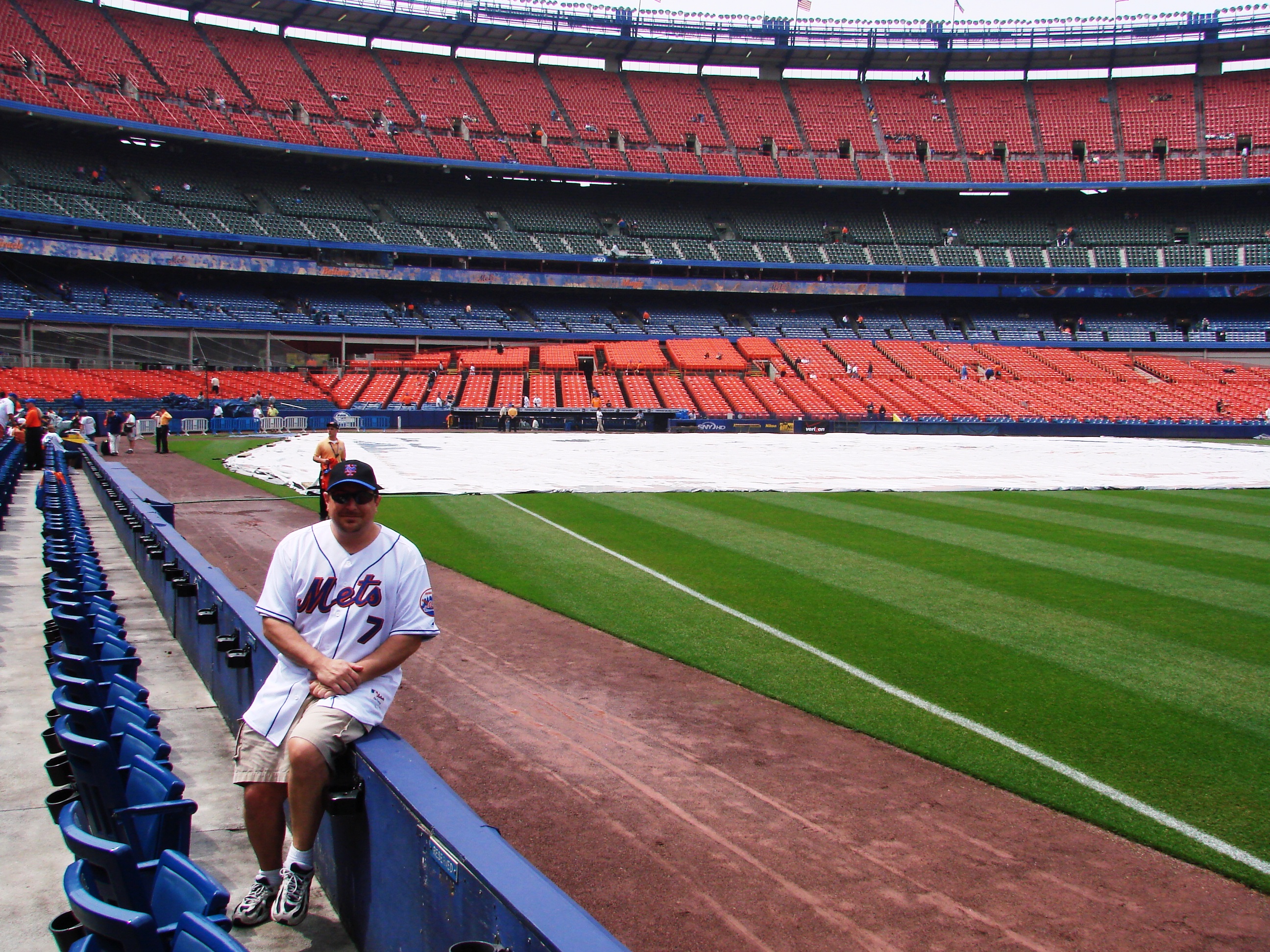 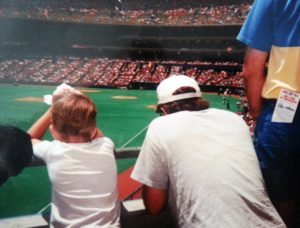 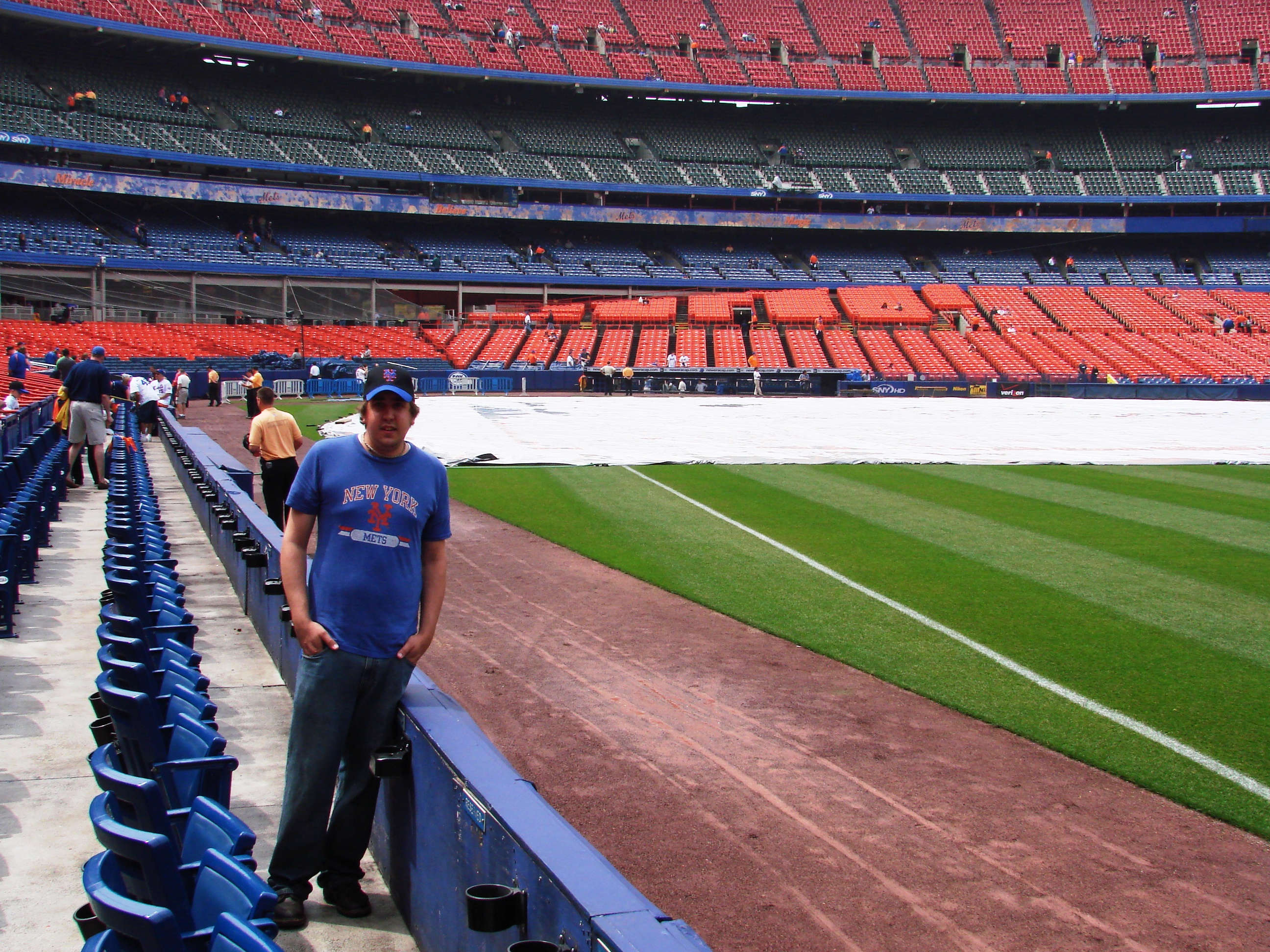