Over the years, I have acquired older bats that would seem to be from the 19th century. I’ve always kept an eye out for a vintage baseball or Town Ball bat at yard sales, garage sales and antique shops. They may be found leaning in a corner somewhere, almost forgotten. Now and then, a touch of baseball past comes into light and make it all worthwhile. Well, this post is NOT about one of those times.

Recently I decided to have a couple of my bats appraised for auction. I sent photos to the online auction house, that I frequent, for their opinion on their authenticity.

My thoughts held that the bats could be from a game called Town Ball and perhaps they were from the mid to late 19th century. Town Ball was a game that contributed to the evolution of baseball. It was played prior to and concurrently, for a time, with the establishment more traditional baseball rules.

The barrel of one of the bats that was being appraised was oval, which can be a characteristic of a Town Ball bat from that era. The email response I received led to more questions than answers. I was told they were interested in a possible consignment of the bats but they would need to see the actual bats to authenticate them.

They were concerned one of the bats could be a firkin handle…mmm…a firkin handle. I see. I have been interested in baseball my entire life and have never heard of a firkin handle let alone seeing the relationship between a firkin handle and the game of my youth. If you google a “firkin” in order to see it’s handle…you probably won’t be able to conceptualize a bat out of the image. If you can, you may be an engineer in waiting.

And even if it is a firkin handle, is that so bad? Somebody honed it into a bat and played some type of “game of ball” with it, perhaps during the civil war era. I spoke to a local antiques dealer, and he felt the bat was not a firkin handle but the age could be true to the era I envisioned.

We ventured to the Philly Sports Collectors show with bats in tow. The auction house I had dealt with we’re at this event. I showed them the bat with the oval barrel and they agreed on the era of the bat being the mid to late 19th century  but now it might be a butter churn! 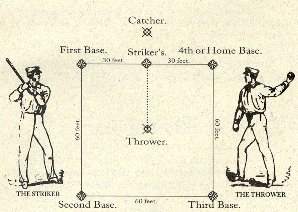