What began in the early summer of 1971 finally came to fruition on a cold March day in 2017. Baseball card collecting began when I was six. Our newspaper boy graciously offered his small collection of 1971 Topps baseball cards to me. There was about 50 cards in all. I studied them and took them to “show and tell”. I took them everywhere I went, as such, they never had a chance to be in mint condition.

I never worried too much about the condition of the cards I acquired for this set. Over the years, I had picked up some of  the well-known players from the 1971 Topps set as well as “lots” of 50 or 100 cards here and there. I really began to think about completing the 1971 set in the mid 2000’s when I realized I had about 2/3 of the set.

Collecting 2/3 of this set was really just the beginning of putting this set together as I would learn. Much has been written in the collectibles universe about the 1971 Topps Baseball Set and I can tell you that it is all true. The black borders, hi numbers, seven series, short prints, all lend a dynamic to the collecting of this set that adds fun and frustration. Hence the dozen or so years to wrap up the task of completing the set.

The entire project was hastened, thanks to Mrs. V. Every birthday or Christmas, Mrs. V would  contribute to the collection. Exchanging cash for cardboard went against every fiber in her body. But loves overcomes and she was a major contributor to the completion of the 1971 Topps Baseball Set.

Whenever you complete a set of sports cards, you never know what card will be the last one needed. For me it happened to be the Dusty Baker/Don Baylor rookie card number 709. It was a rookie card, a hi number, and a short print. I needed about 15 cards to wrap up the set so I attended the Philadelphia Sportscard and Memorabilia Show on March 4. Those reasons I mentioned above for taking a dozen years to complete this set surfaced at this convention. I had to visit about 20 dealers until I finally tucked away the last card needed.

My set would grade fair to good overall. As I was looking over the completed set, I noticed I had two Frank Johnson cards in my album.

His card is number 128, that would mean moving over 600 cards back one slot. Well, guess what? That extra card is staying put. Every time you glance incorrectly at one of these black border beauties, a fleck of the black border comes off.

I have a few 1959 Topps baseball cards…But I am certain…Mrs.V is not ready for that pursuit. That would be even older cardboard. 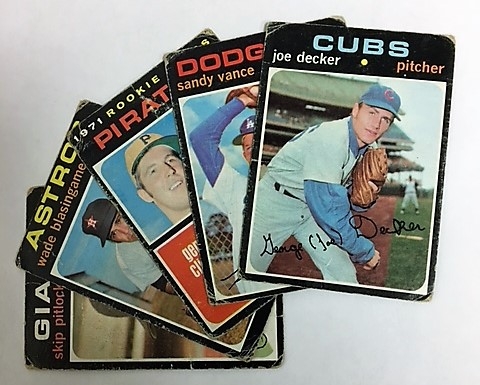 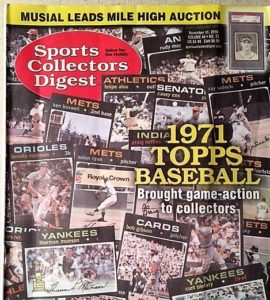 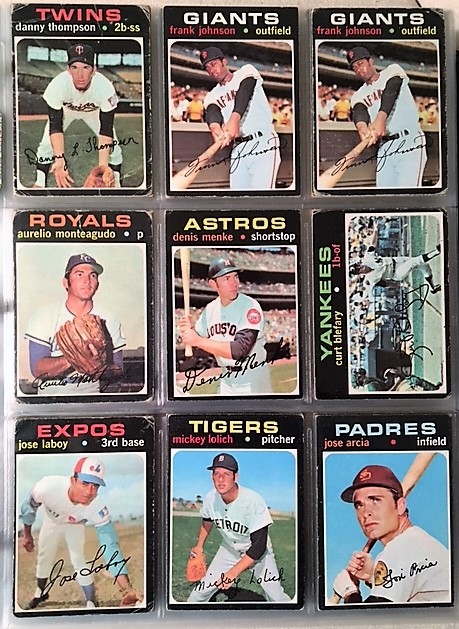 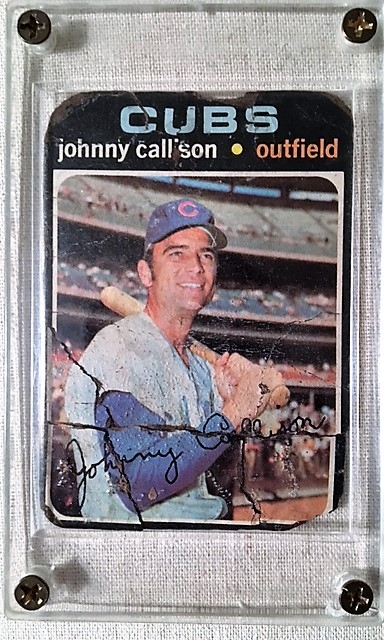