The Queens Baseball Convention: A Glimpse of Summer

The Queens Baseball Convention: A Glimpse of Summer

Ground zero for Finding Nostalgia was at Katch Astoria in Queens NYC on Saturday, January 28 for the Queens Baseball Convention. Passionate Mets fans attended the mid winter gathering with an optimistic view of the future and a glance back to the Mets compelling past.

Tim Teufel was kind enough to share his experiences on the current Mets squad as well as giving us a peek back to the ’86 team that dominated the baseball world.

Mets fans could not get enough of his humor and unique insight into the team that we have such a vested interest in. The history and reasoning behind the “Teufel Shuffle” was shared and enjoyed by a captivated and baseball starved crowd. Michael Baron hosted the Q&A with Tim. Shannon Shark and Greg Prince awarded the QBC 17 “Gil Hodges Unforgettable Fire Award” to Tom Seaver. Art Shamsky was available to accept the award on Tom’s behalf.

Art Shamsky was a member of the 1969 World Champion Mets team and took the time to share his memories of his time with Gil Hodges and Tom Seaver. Art made himself available to meet ‘n greet with fans. He was, both, gracious and informative. Meeting him was a special moment for me.

The Uniform Panel was made up of six experts in the realm of Mets uniforms. This panel was FUN. Paul Lukas of UniWatch.com moderated this wonderfully in-depth discussion of Mets uniforms. Topics included uniform numbers, uniform modifications,  uniform combinations and so much more. Mets fan, resoundingly, prefer the classic pinstripe with no modifications or alternate combos. A couple of fascinating facts were shared by Phil Hecken.

The New York Mets were 0-11 in 2016 when wearing Matt Harvey’s favorite alternate blue uniform. I hope the Mets execs that were present took note. Phil also shared ALL of the stats in regards to Yoenis Cespedes canary yellow compression sleeve. He is batting over .300 when he wears it and .240ish when he doesn’t. Given that nugget, we should all wear our compression sleeves given out July 3rd 2016 at CitiField. If nothing else, we would look good and our odds at life might be better. Thanks for sharing Phil.

The star of the Queens Baseball Convention was former New York Mets manager Bobby Valentine. The room was electric as soon as he entered. Bobby treated fans with the entertaining background story of his dugout disguise episode. Many in attendance were surprised to hear how Robin Ventura played a major role in getting Bobby back into the dugout after being ejected.  He also discussed the 9/11 home run by Mike Piazza. He emphasized the sound the ball made off of the bat and how, at that moment, somber and grieving emotions were transformed within the confines of a ballgame. It was special to hear him tell it.

An amusing moment occurred when Matthew Cerrone asked Bobby a question and referenced former Met, Desi Relaford. Desi had a nice but short tenure with the Mets during Bobby’s time as manager. Bobby immediately began searching his messages on his phone and stated “Desi sent me a photo this morning”. This was an amusing moment but I feel it speaks volumes about the man Bobby Valentine is. A player who was with Bobby for 120 games, 15 years ago, still has a relationship with him. He is a baseball man who can inspire and teach more than just baseball.

Plan on attending the Queens Baseball Convention next year!

Special Thanks to Keith Blacknick of TheMediagoon.com, Shannon Shark of TheMetsPolice.com, and Dan Twohig for putting on an event such as the Queens Baseball Convention. There is so much more to share but time limits me. If you love the New York Mets, this will be an event you will want to attend in 2018.

Below are audio links to a few of the discussion panels courtesy of TheMediagoon.com. Enjoy! 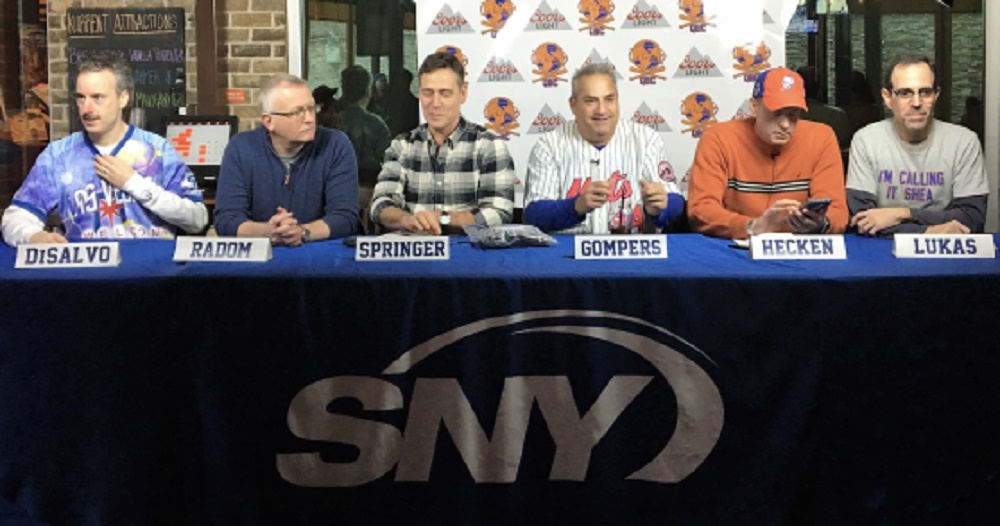