Do You Still Have Your 1971 Johnny Bench KedCard?

Home/News/Do You Still Have Your 1971 Johnny Bench KedCard?
Previous Next

Do You Still Have Your 1971 Johnny Bench KedCard?

Does this image elicit any youthful memories? If you are of a certain age, a brief glimpse of childhood can be had by gazing into the bright yellow, red, and stark black that was a Keds shoe box in 1971. Willis Reed, Stan Smith, Bubba Smith, and Johnny Bench will forever be entwined because of a shoe box lid. Four athletes who were iconic to their respective professions. It was in 1971 when Keds marketing gave us all something to behold with the release of KedCards on the lid of their shoe box, including the 1971 Johnny Bench KedCard.

The card below is the last remnant of my shoe box lid. I was six years old at the time and Johnny Bench was a name that was larger than life to my young imagination. I did not know much about him except that he was a catcher and that he had to be awesome with a name like that. Johnny Bench would set the standard for the position of catcher for both offense and defense.  Bench can hold seven baseballs with one hand. I can not. He was elected to the Baseball Hall of Fame in Cooperstown in 1989.

This card was, most likely, my first or second card and consequently led to my pursuit of all things “baseball”. (Good thing Mrs. V. was not in the picture. She may have hindered my acquisitions. No time for love back then.) Most of the examples you will stumble upon will still have the printed perforation markings on the outer edge. Apparently, I wanted no part of those markings when I, or my mother, trimmed the card from the lid. Foolish child that I was. Somewhere in the untouched and unseen corners of my collection, I might have the Bubba Smith card. That search will have to be a winter project. I can be certain if I find it, it will not have the perforation makings either.

The card below is a 1972 Topps  Johnny Bench. The reason this card holds a special place in my collection is how I acquired it. In 1972, I would pick up a pack of cards of every Saturday as I ran errands with my father. I held on to every card that I was collecting that summer. Fast forward 30 years. My father is opening his safe deposit box and this card is in there. Why is that here? He doesn’t know. Where did you get it? He doesn’t know. How long has it been in the box? He doesn’t know. All I can assume is that he took the card for safekeeping when I had my back turned as a young boy. It was a meaningful moment and a wonderful surprise to see Johnny Bench peering at us from that safe deposit box. Dad was pretty proud of himself.

Here is a link to an Ebay listing for an example of the entire four KedCard panel. 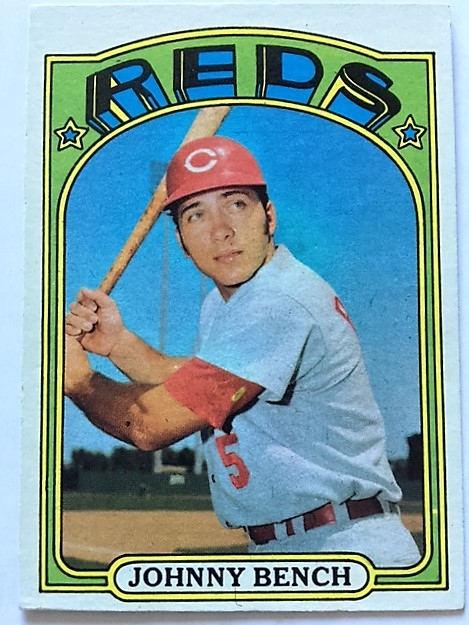 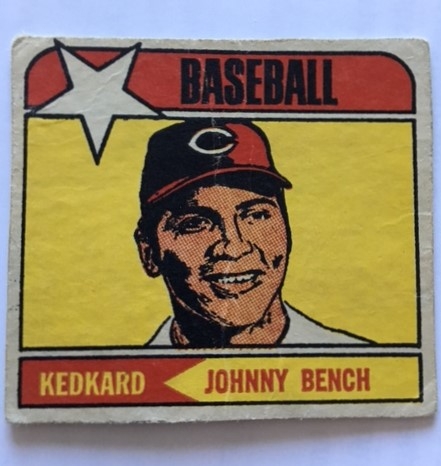